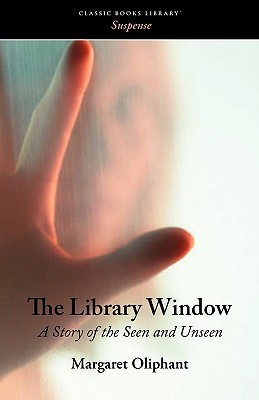 I normally don’t review books I read for my literature courses because they’ve already been widely reviewed. Why do you need me to tell you to read Shakespeare’s Twelfth Night? You’re probably going to read it at some point anyway. (If you haven’t yet, you really should; it’s a good one.)

The difference with The Library Window is that it’s not well known. Though she was a favorite of Queen Victoria and wrote over 120 books, she’s not studied much today. This post is my PSA that Oliphant is an author worth studying. She certainly deserves more than nine reviews on Goodreads.

The Library Window is a Gothic novella (or, if you want to be cute, “novelette”) around 50 pages long. It tells the story of a young, unnamed narrator who begins to notice a peculiar library window across from her aunt’s home. While her aunt’s friends speculate that the window is a fake, the narrator grows more certain that it is, in fact, real. Over time, she begins to see the room behind the window and, eventually, a man living in it. She discounts the older ladies’ claims as a result of their poor eyesight, but the window and the man beyond it still seem not quite right. The narrator becomes obsessed with the man, perhaps to the point of madness.

This was Oliphant’s last book; she died a year later, having outlived her husband, brothers, and all her children. This fact makes the novella even more haunting.

It’s the sort of haunting I can tolerate though. As someone who’s successfully avoided horror movies, I’m not one to read scary books, and I don’t think this books is scary. It’s suspenseful and it sticks with you, but it’s not scary.

It’s hard to talk about this book the way I normally would. There’s no epic romance, but the relationship between the narrator and the man in the window she only sees from across the street is an interesting one. The cast is almost entirely female, but the main character is a girl who enjoys reading and daydreaming; she is a relatable character at first and a strange character later.

The plot is not remarkable in any way, nor is it unremarkable. It is what you’d expect from gothic literature, but that doesn’t detract from my experience of the book. It’s a page-turner because Oliphant writes it in an interesting way. She leads the reader to ask plenty of questions and never answers one without bringing up another. That said, she never answers all the questions, surrendering her story to the reader’s interpretation.

That’s what I love most about this story: its openness to interpretation. The meaning behind the elusive library window, the narrator’s growing interest in it, and her strange relationship with her aunt and her aunt’s friends opens the novel to multiple readings. Even more interestingly, since the book is not widely reviewed, I don’t think anyone has yet found a perfect answer to the meaning of the novella–and perhaps they never will. The questions that remain after the books’ conclusion add to the sense of mystery.

The Library Window is a brilliantly written novella that doesn’t have the readership it deserves.

Recommendation: Literature majors, especially those who appreciate Victorian and Gothic literature, will appreciate this book.

Since it’s such a quick read, I’d say those who enjoy suspense stories and don’t mind them being historical would also appreciate this novella. If you like Poe, this is perfect for you. It’s the sort of book that should be read around Halloween, anyhow. And it’s appropriate for the kiddos. It teaches them to stay away from strange men in the window and diamond rings. I might be stretching it a little, but you get the gist.

Last night, SVSU brought The Asia Project on campus. Unfortunately, a poetry slam happened around the same time, so only 15 people showed up to watch the spoken word poetry event.

The Asia Project is a duo featuring poet Asia Samson and guitarist Jollan Aurelio. Asia writes the poems himself and performs them with Jollan’s accompaniment.

Many of the poems were deeply personal to Asia, so props to him for sharing them. He shared poems sparked by his battle with cancer, his son’s birth, his marriage, and his sister’s tragic death.

The poem dedicated to his sister, “Awakening,” was definitely my favorite.

I related to this poem, but in an unexpected way. I may be familiar with loss, but I’ve never lost someone as close to me as Asia was to his sister.

No, I did not relate so closely to the feeling of loss. I related better to the hollowness he hinted at in the end of the poem when he said, “Life is a coma we can still choose to wake up from.”

“Life is a coma we can still choose to wake up from.”

I’ve been a college student for a few months now, but I feel further away from home every day.

Part of the problem is that I don’t know where home is. My dorm? My family? My high school? My friends’ colleges? Whenever I’m at one place, I long to be at another. I’m stretched everywhere and I’m comfortable nowhere.

When one feels out-of-place, she ought to discover more about herself. With nothing around to distract her, she should be able to look down at herself and say, “This is what I am.”

When I look down, I see right through myself.

The problem is, I don’t know why. I know my purpose. I know what I want to do with my future. I know what I stand for and against. But I feel like there’s some part of myself I haven’t tapped into. It still sleeps somewhere inside me and every now and again it snores, reminding me that I’m not fully awake.

“Life is a coma we can still choose to wake up from.”

But how do we start?

I think I need to stop looking and start watching.