This book was provided by the publisher via NetGalley in exchange for an honest review. 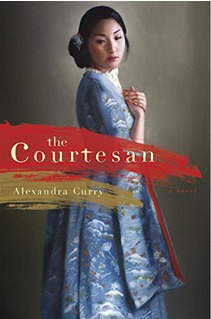 Review: Though its voice is reminiscent of a tragic fairy tale, Alexandra Curry’s debut novel The Courtesan is actually a work of biographical historical fiction.

The story begins in 1881 with the execution of young Sai Jinhua’s father and her subsequent sale to a brothel. Under the cruel eye of Lao Mama, Jinhua endures footbinding and “bed business” with the support of her maid Suyin. The two girls become like sisters to one another until the haunted Sub-chancellor Hong makes Jinhua his concubine, taking her away from Suyin and brothel life.

When her new husband is asked to serve the Chinese empire as an ambassador to Vienna, Jinhua accompanies him on the journey, where she is drawn to European culture in a way he does not understand. Defying her husband’s wishes, she obsesses over learning German and even begins to fall for a Prussian count.

In keeping with the tragic fairy tale style, Jinhua does not have the blessing of a happily ever after.

She returns to a changed China as a changed woman, and her new-found Western sympathies threaten herself and those dear to her under the rise of the Society of the Righteous and Harmonious Fists.

From the beginning, it is clear that Curry conducted a lot of research for the novel. She pulls idioms from the German as well as the Chinese language. She threads other historical figures through Jinhua’s story and holds to her understanding of those figures. Her depiction of Chinese and Viennese culture of the late 1800s is rich enough that I can imagine it without much difficulty.

One of my favorite traits of the book—second only to Curry’s fairy tale voice—is her constant movement between characters’ perspectives. While most of the book is told in third person limited from Jinhua’s angle, other chapters explore the minds of side characters like Suyin and Jinhua’s Viennese maid.

My favorite chapters, though, are the ones that tapped into the viewpoint of characters who stand in the way of Jinhua’s desires. The first chapter, for example, details the death of Jinhua’s father from the executioner’s eyes. Other chapters look through the lenses of Jinhua’s father’s First Wife, the go-between who brought Jinhua to the brothel, Lao Mama, and Sub-chancellor Hong’s First Wife.

The constant movement between characters humanizes those who don’t deserve to be humanized and adds gravity to the novel.

That is not to say the book lacks gravity without these chapters; on the contrary, it takes every grim turn a story can take.

The scenes of footbinding and “bed business” are graphic and characters—particularly those from the brothel—swear intensely. These details made the book difficult to read, but I believe they’re necessary for the portrayal of Jinhua’s environment in this novel.

The most important judge of any historical fiction piece, in my opinion, is that the reader wants to learn more about the figures and events covered in the piece by the end than they did when they began.

For this reason especially, I belief The Courtesan is a success. I’m now far more interested in Sai Jinhua the events leading up to the Boxer Rebellion than I was before reading the novel. I’ve already begun poking around to see what others believe to be the true story of Jinhua and to learn more about the Boxer Rebellion.

Though I love the novel’s style and believe it to be a successful work of historical fiction, the novel fell short in the realism of its main character. Jinhua herself is ever-changing—a trait Curry likely instilled to emphasize her “many lives.” It may be less poetic, but I believe the depiction of Jinhua as having one life with many phases would have saved her character from frequent contortion.

Aside from this fault in Jinhua’s character, The Courtesan is a masterfully written novel with a great love for tragedy.

Recommendation: Fans of Amy Tan, Chinese fairy tales, and the historical context of this novel will likely enjoy it.

I would not recommend this book to victims of abuse or those sensitive to a gritty narrative.

The Courtesan will be available for purchase September 8th.