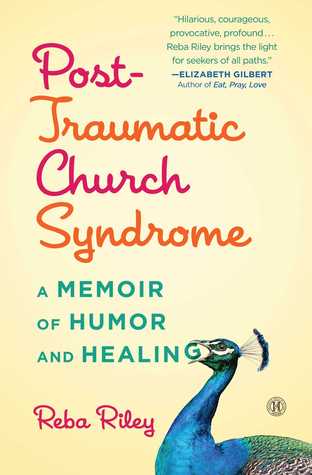 A big thank you to Howard Books for sending me an early copy of this book! And hardcover, no less! It comes to shelves today and I’m excited to see what other readers think.

Review: In Post-Traumatic Church Syndrome, Reba Riley recounts her experiences with thirty religions in one year–a quest she felt led to undertake on her 29th birthday.

Riley struggles with “Post-Traumatic Church Syndrome,” which she describes as “A condition of spiritual injury that occurs as a result of religion, faith, and/or the leaving, losing, or breaking thereof.” While I haven’t faced a big break with the church, I know people who have and I’m sure many can relate to the term.

During her 29th year, Riley also struggled with a mysterious illness no doctor seemed able to diagnose. She felt that, if she couldn’t heal her body, she could at least work toward healing her spirit.

In the novel, Riley discusses her experiences among the Amish, Buddhist, Muslim, Scientologist, Hindu, Native American, Wiccan, Jewish, and a whole hodgepodge of Christian churches varying from virtual reality to a drive-in to a movie theater.

What impresses me most about this book is not the fact that the peacock and disco ball on the cover actually relate to the story (though that is impressive); it’s Riley’s voice. She manages not only to keep me laughing, but also to keep me thinking. I’ve never read a memoir with so prominent a voice. At some point near the beginning of the book, I connected with her (I think it was when she fell down the stairs and flashed her birthday party crowd and everyone on the street). By the end, I felt like we were good friends. If I ever run into her on the street, I’ll probably start conversing as though I’ve known her for years and she’ll just stare back at me wondering who the heck this blonde chick is.

I’m also amazed by Riley’s story. I always have a hard time believing miracles in memoirs because the author is typically biased. But Riley clearly didn’t want to go back to church. And I don’t believe she would change her memory of her story to fit the religion she chose because she didn’t chose a religion at the end of her experience; she simply chose faith.

I don’t fully agree with her theology, but I don’t have to in order to appreciate this book. It is clear that God has made an imprint in her life; miracles are woven into each page. More than her story itself, I was interested to hear her thoughts on religions I’m unfamiliar with. Through her experiences, I feel more open to experiences like meditation and fasting, to which I was previously closed. I also feel more tolerant of beliefs like Scientology and Native American religions, at which I previously scoffed.

Though I believe many of Riley’s anecdotes about visits to different sects of Christianity were important to her personal story, I would have liked to hear more about her visits to other religions. I know there’s not a wide variety of religions represented in Ohio, but at one point Riley casually mentions she visited Christian Science, Unitarian Universalism, Sikhism, and Seventh-Day Adventism. She does acknowledge that these visits “barely registered” because her illness drained her of the energy needed to “research or get into the services.” If she did not attend services, how did she visit these religions? What were her interactions with these religions like? I’ve been curious about the beliefs of Christian Science and Sikhism in particular, and I wish she would’ve explored these more later or written more about what experiences she did have.

Though I would’ve liked to hear more of Riley’s experiences, this is only because I found the experiences she did share incredibly interesting. She doesn’t just attend services of other religions; she does what people of those religions do on her visits, cleaning herself before service at a mosque; getting audited by Scientologists; eating peanut butter, marshmallow cream, maple syrup, jelly, meat, cheese, and pickle sandwiches with the Amish. Anytime an individual steps far out of their comfort zone, an interesting story begins.

Throughout the book, people of all religions tell Riley of her destiny as a healer. I think this is a destiny she lives out through her book and her blog. This book will bring healing to many people, regardless of whether they’re searching for faith, running from faith, or already bound to faith. Reading Post-Traumatic Church Syndrome is especially a good remedy for those who identify with the title diagnosis.

Recommendation: Everyone should read this book.

Well, not everyone everyone–I can think of one or two super conservative people who may be disturbed by Riley’s theology to the point of burning or banning it, which I don’t much care for–but people from all walks of faith should read this. (Yes, I’m talking to you.)

Not literally, of course. It’s prose. But if poetry could be prose, it would be Magonia. Headley pays attention not only to the words she uses, but how they look on the page. I’ve never seen a novel do that before–especially not a YA novel.

Within just a couple chapters I could tell the author is smart. She weaves historical irregularities (or, dare I say, conspiracy theories) around the fantastical world of Magonia, a civilization living in the clouds.

In the novel, 16-year-old Aza Ray, who suffers from a never-before-seen lung disease, hears a ship in the storm clouds call to her. While others chalk it up to medication-induced hallucinations, Aza and her genius best friend Jason research what the ship may be. Just as they’re on the brink of something big–in both their research and their relationship–Aza loses herself to her sickness and finds herself in a different world. A world above the clouds. A world that seems convinced she can help save it from the disaster pollution has doomed it to.

Not only does this book have a beautiful plot; it has quirky, loveable characters. The protagonist is a pessimist and I didn’t like her attitude from the start, but… she’s dying. I think a negative outlook on life fits her character well, particularly since she was in such a difficult situation. And I was able to appreciate her voice by the end of the book. My favorite character was the pi-reciting, alligator-suit-wearing inventor Jason. He’s different from any other character I’ve read in the best way possible. While I normally find that I prefer one voice over another when a story is told through multiple characters, I enjoyed reading from both Aza’s and Jason’s perspectives.

Though the novel centers on Aza and Jason, the secondary characters are also well-developed. I know very little about Aza’s sister Eli, for example, but the image of her hair cut ragged at the ends brought me to tears. And Jason’s moms (especially Eve) were defined in such a way that they clarified Jason’s character. Through a single comment about Big Bird and a story about war-mice I understood all I needed to know about Aza’s parents. Headley’s characterization brought the story to life; moreover, it did so concisely. There isn’t one scene I would cut.

The book isn’t a light read, either. It addresses a wide variety of controversial topics, namely environmental destruction, physical disabilities, mental disorders, and homosexuality. I mean, the novel is based on an early conspiracy theory.

I scrolled through other reviews on Goodreads to see why other readers may dislike this book. One reader said she couldn’t buy into the concept of bird-people. While I think Headley could have used more description of their appearance, what does it really matter? The ambiguity of this fictional race allows readers to come up with their own image of the “bird-people.” I understand that some people prefer authors to have detailed world-building rather than leave it up to the reader’s imagination, which is why I just recommend this book for those who can allow themselves to imagine and believe in another world, even if only for a little while.

The urban fantasy seems to be the only bit readers get caught up on, so I think the problem is not in the book itself, but in making its target audience a little more precise. Though the beginning may sound similar to John Green’s The Fault in Our Stars, for example, I would not recommend it to the same readers, since it relies much more on fantasy and strays from the “sick girl perspective” about a quarter of the way through.

Who would I recommend it for, then? Hm. This book is so completely unlike anything else I’ve ever read, it’s difficult to identify the best audience. Age-wise, I would recommend it for high school students and above due to language and the depth of certain concepts.

All I can think to say besides that is Magonia is like if Neil Gaiman were to write Kenneth Oppel‘s Airborn from the perspective of a darker Hazel Grace. If that sounds remotely interesting to you, I recommend reading it.

PS–Apologies for my absence from this blog. I returned from college and had to train for my summer job, so my schedule’s been a bit scattered.